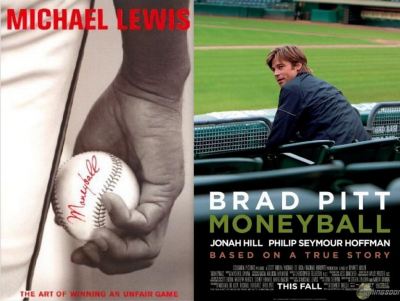 In some ways, I was pretty late to the whole Moneyball thing.  I didn’t see the critically-acclaimed movie, released in late 2011, until well after it had been released on DVD. And the book that I recently finished was published in 2004, so I was about 8 years behind there.

But I’ve been familiar with some of the concepts central to the theme of Moneyball for quite some time. I was a pretty dedicated fantasy baseball nerd for years (I retired a few years ago – it was consuming too much of my time). In the pursuit of fantasy baseball championships, I turned to advanced baseball analysis and statistics, like those available on fangraphs.com.

Although the statistics normally used in fantasy baseball are based on traditional baseball statistics, I found that using sabermetric analysis could still help me tremendously in predicting future performance. It allowed me to look at players differently than most of the other people in my league, identifying players whose surface stats were either inflated or depressed compared to their actual skills and superior traditional statistics (often in very small sample sizes). With that valuation analysis I was able to consistently buy low/sell high, deriving substantial benefits (i.e., I almost always won).

Moneyball Is Not a Book About Baseball

Ok, maybe it is about baseball, technically. Billy Beane is a former baseball player turned general manager of the Oakland A’s, a small market team trying to compete on the field while being restricted by a payroll literally several times less than the richest teams. On base percentage (OBP), old school scouting vs. new age statistics, big market teams vs. small market teams, etc.

So it is about baseball on the surface. But it is replete with lessons that are applicable to business, and life in general. Here are a few of the themes that I identified while reading.

Applicable quote from the book:

“Managers tend to pick the strategy that is the least likely to fail, rather than to pick a strategy that is most efficient. The pain of looking bad is worse than the gain of making the best move.”

Will it get you results continuing to do things the way they’ve always been done? Maybe, but it’s not going to get you very far ahead. In order to do that, you’ve either got to perfect the conventional processes through increased efficiency, etc., or you’ve got to take a different approach. Think about things differently. Which leads to…

Baseball is simple. Score more runs than the other team and you win. Run production and run prevention. So:

But, traditionally, the line of thinking has been:

Quote (from the movie):

Peter Brand: There is an epidemic failure within the game to understand what is really happening. And this leads people who run Major League Baseball teams to misjudge their players and mismanage their teams. I apologize.

Peter Brand: Okay. People who run ball clubs, they think in terms of buying players. Your goal shouldn’t be to buy players, your goal should be to buy wins. And in order to buy wins, you need to buy runs. You’re trying to replace Johnny Damon. The Boston Red Sox see Johnny Damon and they see a star who’s worth seven and half million dollars a year. When I see Johnny Damon, what I see is… is… an imperfect understanding of where runs come from. The guy’s got a great glove. He’s a decent leadoff hitter. He can steal bases. But is he worth the seven and half million dollars a year that the Boston Red Sox are paying him? No. No. Baseball thinking is medieval. They are asking all the wrong questions. And if I say it to anybody, I’m-I’m ostracized. I’m-I’m-I’m a leper. So that’s why I’m-I’m cagey about this with you. That’s why I… I respect you, Mr. Beane, and if you want full disclosure, I think it’s a good thing that you got Damon off your payroll. I think it opens up all kinds of interesting possibilities.

Not Everything (or Everyone) of Value Will Fit Your Expected Mold

Don’t judge a book by its cover.

Here’s one of the best exchanges, regarding a player named Jeremy Brown. Brown’s actual on-field collegiate production was outstanding but due to the fact that he, to put it politically incorrectly, was fat, he was completely ignored by all scouts:

“Oh, you mean like Babe Ruth?” says Billy. Everyone laughs, the guys on Billy’s side of the room more happily than the older scouts across from him.

“Yeah,” says the scout. “Well, in this case low energy is because when he walks, his thighs stick together.”

“That’s good,” says the scout. “Because if you put him in corduroys, he’d start a fire.”

Beane’s team was at a significant disadvantage due to being a small market team with low revenues, resulting in not having an abundance of money to spend on building the team. While the Yankees were spending $125+ million in yearly payroll, Oakland was spending  maybe $40 million. With the inability to throw large wads of cash at big name free agents, the team had to identify areas of the baseball market that were undervalued. This led to using sabermetrics to find:

“The inability to envision a certain kind of person doing a certain kind of thing because you’ve never seen someone who looks like him do it before is not just a vice. It’s a luxury. What begins as a failure of the imagination ends as a market inefficiency: when you rule out an entire class of people from doing a job simply by their appearance, you are less likely to find the best person for the job.”